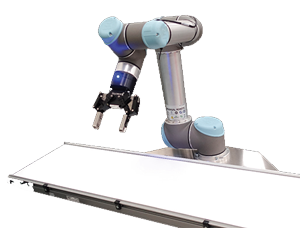 Caps are to robots, what apps are to smartphones: useful accessories, hardware/software extending the capabilities of UR robots handling many different tasks. Universal Robots has created a platform for robot users worldwide providing a shortcut to proven combinations of robots and accessories.

URCaps is a platform where distributors and integrators can present accessories that run successfully in UR robot applications at end users.

Any supplier of robotic accessories and solutions that have proven to be suitable for UR robots can download an application form at: Universal-robots.com/plus.


"URCaps allows you to choose
a proven combination of robot grippers ... to prevent delays and aggravation."

After this, the dialogue with Universal Robots begins. If the proposal is approved by UR, suppliers can now offer their products directly to interested buyers - in the countries where the CAPS are sold. The first URCaps are a combination of workbenches, vision solutions, cables, jaws and grippers.

Caps are an abbreviation of the word capabilities. The first 24 caps are already featured on the platform. These caps have been through a thorough trial integration testing, a vital requirement that URCaps must be proven and in use within the industry.

“Quick and painless implementation and high uptime are the alpha and omegas in the global industry. By choosing solutions from URCaps, both distributor and end-user get high security and predictability that applications will run well from the start. URCaps can save weeks and months into the process from concept to operation of the robot in production. If a robot installation becomes a problem, it can be complicated to determine what the source is. URCaps allows you to choose a proven combination of robot grippers or other accessories from the beginning to prevent delays and aggravation,” explains Esben Østergaard, CTO at Universal Robots.

The business model for URCaps is simple and transparent. URCaps is a platform where distributors, integrators and suppliers present accessories that run successfully in UR robot applications at end users.

A filtering function allows prospects to sort URCaps according to different parameters. Universal Robots does not profit from sales made through URCaps. The only requirement is that customers purchase the robots from an authorized UR distributor in their home country.

Control either one or two conveyors, which is set up using the Polyscope Interface through the robot teach pendant.

What this does for the machine builder is to gain control of the conveyor to integrate it into the overall system.

•  It is now easier to start, stop as well as control speed and direction of the conveyor from the robot controller


•  Benefits might include multiple speeds during a robot cycle

No one has commented yet.